Delays Getting Worse at the Landlord Tenant Board 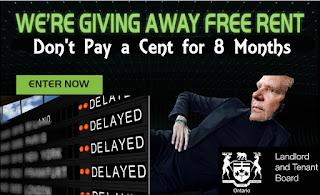 I don't understand how the Minister of Housing, the Attorney General and the Premier refuse to deal with the growing backlog at the Landlord and Tenant Board, Ontario's busiest administrative tribunal. There is a critical shortage of members at the LTB, and as of December 31st, more than a dozen of those remaining members will be history with no new ones yet appointed.

It can literally take 6 months in Toronto to get a hearing at the Board. For rent arrears! Landlords I speak to are furious at the Ford government...a government they thought would be supportive of landlords. They are livid. I have spoken to many stakeholders who have written the Minister and they get a condescending form letter back from Minister Clark, using the excuse of tribunal independence as an reason not to staff the tribunal correctly.

When I was an LTB adjudicator many years ago, we were doing rent hearings 3 weeks after filing. Today you are lucky to be heard in 3 months. By that point, usually 5 months rent is owing.  And that's just the first appearance.  Often parties are sent home because of rampant over-booking or adjournment requests.  I heard from a colleague that one adjudicator last week refused to hear their case because his term was expiring and he didn't want to get "seized" with the file.

This announcement about Tribunals Ontario is akin to shifting the deck chairs on the Titanic. We have a crisis, but not one the opposition wants to pester the government about, as the Liberals and NDP's love it when tenants can stay rent-free. The NDP must be celebrating the chaos.

The Landlord and Tenant Board (LTB) is experiencing a shortage of adjudicators (members) which is affecting the LTB’s ability to meet its service standards. As a result, you may experience a longer than usual number of days before a hearing can take place. All parties appearing before the LTB are encouraged to take a close look at the Notice of Hearing as your hearing details (location of your hearing or how your hearing will be conducted) may differ from previous hearings. The LTB continues to be committed to providing fair, effective and timely dispute resolution.

I was on one of my paralegal Facebook groups today, and saw this thread which I've redacted for privacy. It's a striking message. There are no adjudicators in Northern Ontario whatsoever. Toronto East which is the area from Scarborough and then east until the Ottawa Region takes over is critically short. I filed 3 applications there 10 days ago. I haven't heard a word. And clearly I won't as the staff is cancelling applications that already have hearings dates, not scheduling new ones. 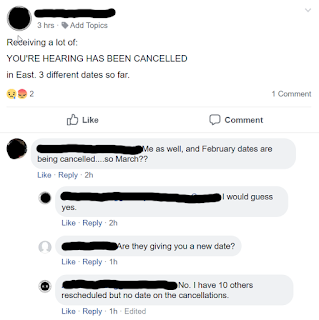 I don't know how they will ever catch up. There is no quick explanation as to where the fault lies as there are numerous factors. But with respect to the shortage of adjudicators, it's Premier Ford and the Ministers of Housing and the Attorney General who let this happen. These are the key players in making public appointments.

Former Liberal government appointments are expired or expiring, and for most landlords that's a good thing, as the ideology of the agency has shifted way too far left over 15 years of Liberal rule. But the expired Members have to be replaced by new Members to take up the slack. That's not rocket science. Appointments alone won't solve the problem, at least not immediately, because the new Members need to be trained. New adjudicators, if they are ever appointed, will take a few months before they can do hearings, and a year before they are really comfortable in the job.

If you are a landlord, call, write or visit your MPP. A complaint to the Ontario Ombudsman might be effective. The current situation is unacceptable. Send a copy of this article. Send this to your local newspaper. Landlords need to get the word out.